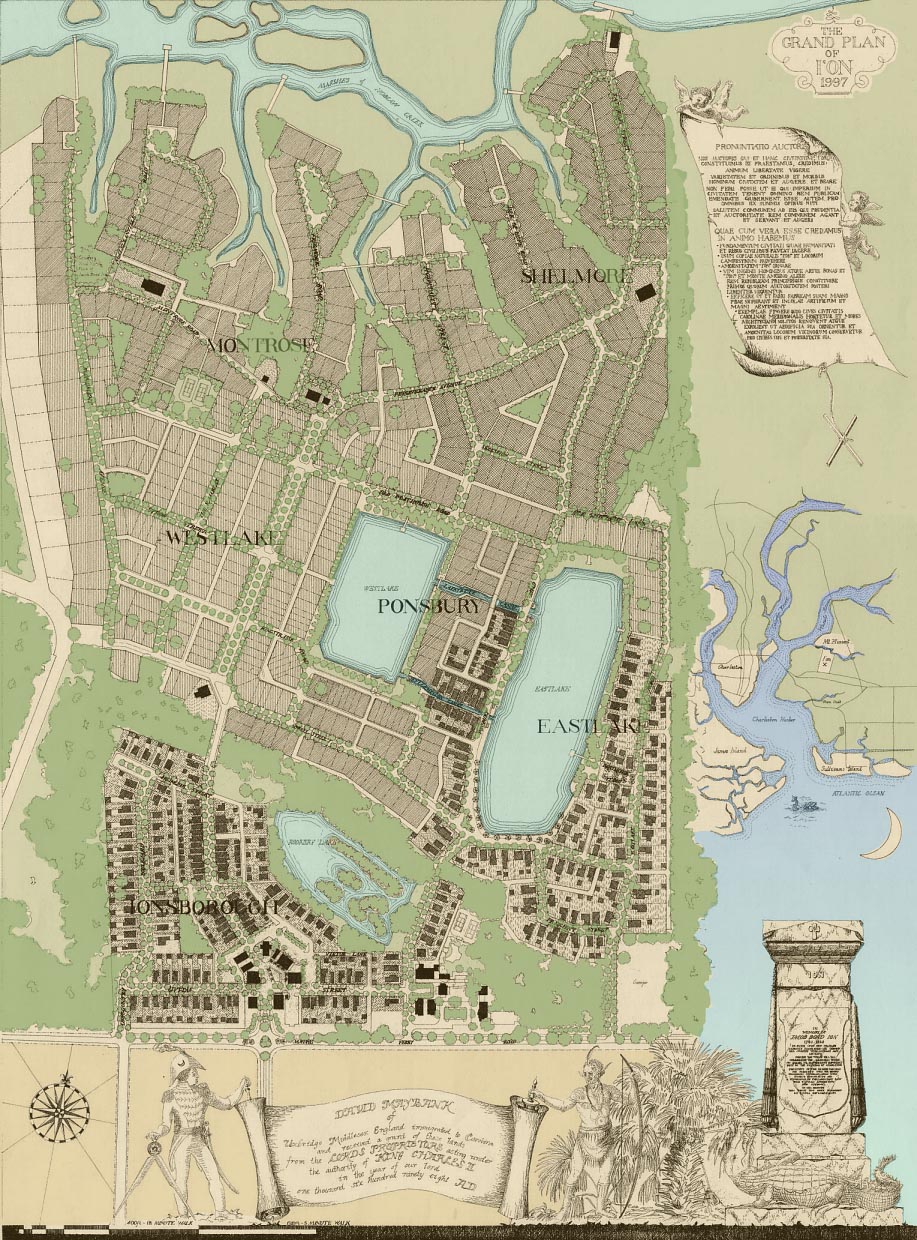 The community was founded and planned under the direction of Vince Graham, who previously established the Newpoint community in Beaufort, South Carolina. Founded on April 30, 1995, I'On was planned as an example of the new urbanism, which includes traditional neighborhood developments. I'On was designed by the town planning firms of Dover, Kohl & Partners and Duany Plater-Zyberk & Company. The community was controversial when proposed and initial plans for a more urban and diverse village of over 1,200 units, including multifamily homes and rented residences were eventually compromised in the planning process to a buildout of approximately 850 single family homes, a village square and locations for civic buildings such as churches and schools. Development plans were delayed by a lengthy legal contest with the Town of Mount Pleasant which ended with the South Carolina Supreme Court ruling in the I'On Company's favor.

Features of the community include extensive sidewalks, shared public green spaces, trails and a grid of narrow, traffic calming streets. This private/public ownership of the neighborhood allows the community landscaping and amenities to be privately maintained, while the streets are maintained by the town. (resulting in a low HOA fee). Most homes have a front porch of not less than eight feet in depth. Ceiling heights of 10 feet+, raised foundations and smaller lot sizes give the community a dense, vertical feel. Overall density of the neighborhood is about 3.8 units per acre, with large amounts of the community's area being taken up by parks, trails, lakes, sidewalks and other common areas.

A commercial center called I'On Square serves as the community gateway. The community is connected to surrounding communities by five roads and two pedestrian walkways.

The community is home to East Cooper Montessori Charter School, one of the first successful Charter Schools in South Carolina. The school enrolls about 250 students in grades 1-8. The school's campus is small and students make use of community playgrounds and green spaces which are within walkable distance.

As of 2020, the community is nearly completed with 775 homes. Businesses include the Inn at I'On, Square Onion gourmet deli, O'Brion's Pub, Community Table, Grace Salon Spa, amongst others.

The maintenance and daily operations of I'On are provided by the on site full-time Community Manager and the Assistant Manager. The 7 person Assembly (HOA) Board is elected by the residents for 2 year terms. Their responsibility is to provide strategic guidance, governance and financial oversight of the Assembly (HOA). The Board works with the Town of Mt Pleasant for road maintenance and emergency services. The Board also collaborates with the I'On Design Committee, responsible for the 'lowcountry vernacular' consistency of design in I'On.

The community takes its name from Jacob Bond I'On. I'On was the first Mayor of the Town of Sullivan's Island. A monument to I'On erected in the 19th century stands in the Northwest part of the community at the center of a 1-acre historic family cemetery which is open to visitors. A historical marker with facts about Jacob Bond I'On's life can be found where the community is entered from a round-a-bout on Mathis Ferry Road.

Communications within I'On are a priority. The community distributes an annual resident directory and emails a monthly newsletter to all residents. Both of these publications are created by the volunteer neighborhood communications committee. The neighborhood consists primarily of custom built homes, a few spec homes, and currently no attached properties (condos & townhomes). There are no plans to allow them in the future. With an average of 25 homes for sale in I'on at any given moment with prices ranging in the low $700s to over $2 Million most buyers can find something they'll like.

The spirit of I'On is maintained by the I'On Trust. A legally separate, non-profit established from the beginning of the development's existence, this volunteer Trust Board is elected by its neighbors/members. The Trust Board organizes community events throughout the year.

As one of the early examples of new urbanist traditional neighborhood development, I'On draws many visitors interested in town planning. Proximity to Mt. Pleasant's historic "Old Village" from which I'On drew many planning elements and world-famous downtown Charleston, South Carolina allows planners to experience and compare both the new community and its historic models.

For ADA assistance, please email compliance@placester.com. If you experience difficulty in accessing any part of this website, email us, and we will work with you to provide the information.

Sign Up
Already a User? Sign In
You have been successfully registered
Please check your email.
Go to the homepage
Sorry something went wrong
Please try again.
Try again